Good meeting of the writers’ group tonight. Looks like we may have some readings coming up.

I’m really getting into Ken’s vampire story even though I usually don’t read vampire stories.

In January 1066, King Edward the Confessor (a Saxon) died without issue (that means he had no children). I have heard various reasons he had no children, one of which is that like so many English kings, he didn’t like to sleep with women. Whether this was because he was so religious, or because he preferred boy, I do not know.
Upon his death, three men claimed the throne of England.
1. Harald Hardrada – a Norwegian wanted to claim back the throne of Cnut and Harthacnut.
2. Harold Godwinson – from one of the most powerful Saxon families in England.
3. Duke William of Normandy – the illegitimate son of Robert of Normandy who was called William the Bastard. William was descended from Vikings who invaded Normandy in the ninth century.
Shortly after Edward’s death, the English Witan crowned Godwinson king. Of course this did not sit well with Hardrada and William. Hardrada invaded England in September and defeated the English at the Battle of Fulford on September 20. Five days later at Stamford Bridge, Hardarda was killed by Godwinson’s men and the Norsemen left England defeated.
On September 28, William and approximately 7,000 men landed at Pevensey and headed toward London pillaging and burning.
Godwinson got wind of this invasion. Although advised to wait for reinforcements, he headed south from London on October 12. He arrived at Senlac Hill about six miles from Hastings the evening of October 13 and set his forces astride the road leading from Hastings to London. He set up on Senlac Hill in front of a great forest. Senlac Hill sloped downward and almost immediately, Telham Hill rose.
While the English army consisted of all infantry, the Normans had mounted troops. Also, the Norman archers, instead of shooting at the enemy, would shoot volleys of arrows into the air in a clout shoot causing a rain of arrows to fall onto the enemy. The main defense of the English army was the shield wall. This consisted of large shields locked together in front of the English lines.
The battle started approximately nine a.m. and lasted for nine hours until Godwinson was killed by a Norman arrow.
William was victorious and on Christmas Day, he was crowned as the first Norman king of England.
I like to say he changed his name from William the Bastard to William the Conqueror.

Example of a shield wall: The shields are held by fighters on their hands and knees and are moved forward one step at a time on command. These shields are made from airplane aluminum whereas the ones at Hastings were probably made of wood. 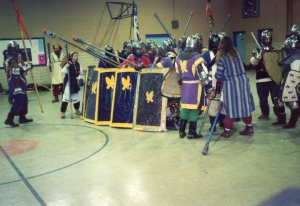