Let’s say you think you’d like to visit the Current Middle Ages. First go to SCA.org and search for a group near you. Next look at the calendar of events for that group. There are a few things you need to know before you visit.
1. All people in the SCA are considered to be of the nobility class. No serfs, servants, peons, etc.
2. You will be asked to make an attempt to look like you belong – the SCA has no observers, only participants. Now you don’t have to dress as elaborate as Molly or Phillipe 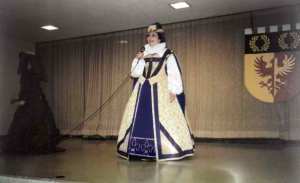 You can be as simple as a tunic. 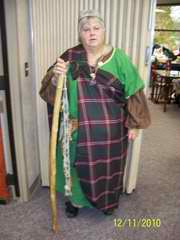 If you don’t have garb, the Gold Key will be glad to lend you some. – Oh, yes. We do NOT call our clothing costumes. It is our garb or clothing.
3. A few pointers.
a. If you hear someone yell “Oh Yea! Oh Yea!, that means “Shut up and listen. There are no microphones and speakers so announcements come from the heralds.
b. If someone calls “Hold”, freeze. This is an indication that there is danger somewhere. It is usually used on the battle field to denote something is unsafe. i.e. a loose piece of armor or a broken sword.
c. Everyone is to be addressed as “milord” or “milady” unless they are wearing a crown of some type. Then they are at the least “Your Excellency” and it is proper to bow or curtsey.
d. The SCA is an honorable group. You do NOT touch anything belonging to someone else without permission.
Let’s say you have a good time at your first event and want to come back. The first thing to make your life in the SCA seem real is to choose a persona. First choose a time between 600-1603 in a country that would have had contact with Western Europe or Great Britain. Yes, even Native Americans are allowed because Columbus came to America in the fifteenth century. Next, choose a name. If you have trouble, see the heralds. You cannot choose a name that designates royalty of any type, nor can you choose a real name like Richard the Lionheart. You also cannot use your modern name in full. If your first name can be traced back to the period you wish to represent, you can use that and call yourself “first name from SCA place”. i.e. Robert of Forgotten Sea.
Be careful when you choose your time period. I originally wanted the mid-sixteenth century until I found out what type of clothing I would need to wear. Corsets in Kansas in August – I think not. So, I went back a couple of hundred years to Scotland in the fourteenth century. Simple tunics and an arisaid (female version of the great kilt). See above photo.

After determining who you are, you have to decide what you are. Are you a fighter?

Do you do leatherwork? 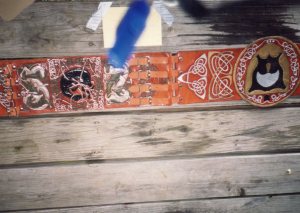 Do you do needlework?

Do you do calligraphy?

Do you do archery?

If it was done in the Middle Ages, you can do it now and there are people who will help you get started.
Events can vary from a one-day tournament and feast to a two-week war. Be prepared to travel. There is something going on almost every weekend of the year somewhere in whatever kingdom you’re in.
Rules for feasts are, bring your own feast gear. A feast may take one hour to three hours to consume. When the first remove is brought out, pace yourself, you’re in for a lot of food. Most feastocrats adhere to ‘period’ foods. If it was found in Western Europe or Britain in period, it’s usable. A lot of foods we eat today are native to North America and mostly considered non-period although there are two schools of thought about some of them. i.e. potatoes, turkey, corn.
Just be ready for a lot of food with strange flavorings.
I mentioned wars. There are several throughout the year which are camping events. While a lot of members go to great lengths to be ‘period’ in their campsites, modern tents are allowed. We do insist on safety. Therefore coolers are allowed, but please hide them. Either inside the tent or covered with a cloth. You will also be asked to unload your vehicle and remove it to a designated parking area where it is not visible from the campground.

All the comforts of home. 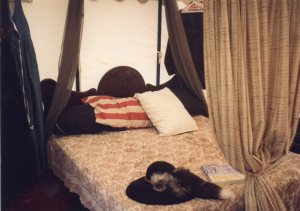 This entry was posted in A-Z. Bookmark the permalink.