I’m venturing a bit out of my period again today to talk about one of the most interesting places I visited while in Scotland.
New Lanark is a village on the banks of the Clyde River in South Lanarkshire. It is approximately 1.5 miles from Lanark. This village was built as a mill town in 1786 by David Dale and the cotton mills operated until 1968. At one time, it was the largest cotton mill in the world.

The River Clyde from New Lanark
In the early 19th century, Dale sold the mills to a partnership which included his son-in-law, Robert Owen. Owen continued Dale’s socialistic approach. Although the mills thrived, his partners did not like the way he put so much back into improving the lot of the workers. Finally he bought out the partners and continued operating the mills until 1825 when he came to the US to start a settlement.
The New Lanark mills were unique in that at a time when children were put to work in the mills at the age of four or five, Owen insisted the children not be allowed to work until they were nine. He established an infants’ school in 1817 to educate the children living and working in the village. 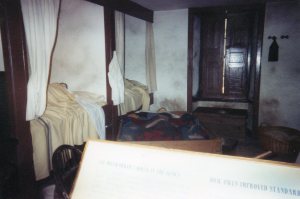 Whole families lived in one room
Owen also established the first co-operative store in New Lanark. He also improved the living conditions of the workers. He proved that it was not necessary to mistreat the workers to be profitable.
Dale’s and Owen’s beliefs were Socialist and no churches were allowed to be built in New Lanark. If the workers wanted to attend church, they had to walk the 1.5 miles to Lanark.
The machinery at New Lanark depended upon water power. Water was diverted from the dammed up River Clyde past several water wheels on each of the buildings.

Spinning Jenny – spins up to 400 threads at a time. Replaced the old spinning wheel. As a spinner, this machine fascinated me.

Drum carder – used to prepare the fibers for spinning.

In the twentieth century, water turbines replaced the water wheels. 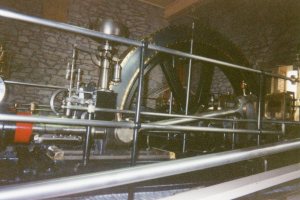 Although parts of the buildings are still awaiting restoration, great care has gone into making the village look as it looked in the nineteenth century. There are no electricity wires, telephone wires, or TV antennas. All power is delivered to the village via underground cables.

This entry was posted in A-Z. Bookmark the permalink.