Allow me to introduce myself. My name is Lady Alisaundre Muir. I was born in the year of our Lord 1296 in the highlands of Scotland. During my forty-sixth year, I stepped through a portal and traveled forward in time to the year of our Lord 1988. I landed in a village called Carlsby (Lawrence, KS) in the Kingdom of Calontir (Kansas, Missouri, Nebraska, most of Iowa, and Fayetteville, Arkansas) in what is called the Knowne World of the Current Middle Ages. I am a member of the Order of the Golden Swan, the Order of the Torse, and the Order of the Leather Mallet. I was the founding Herald of the Shire of Cum an Iolair (Johnson County, Kansas).

I am also a bard of Calontir. As a bard, one of my duties is to tell the history of the Known World. So, today, I tell you the story of the Pennsic War as told to me.

Now we all know negotiations between countries take time. By the time all of the problems surrounding holding the event were ironed out, neither Irial nor Rakkuri was still king. In fact, Duke Caridoc had moved from the Midrealm to the East, fought in Crown Tourney, and was king of the East.

The site and time for the war were finally agreed upon and in the summer of AS 7 (1972), the two kingdoms converged on a place called Newton’s Campground in Waterford, Pennsylvania. I have been told there were approximately 500 attendees at that first war. The name of Pennsic comes from Pennsylvania and the Punic War.

The first war was won by the Midrealm. However, the board of directors had previously ruled  that a state should not be divided between kingdoms. Since there was already a group in Philadelphia that belonged to the East, Pittsburgh was determined by the BOD to belong to the East. Therefore the story handed down over the years was the loser of Pennsic got Pittsburgh.

For the first five years, the war was held at a different place every year. Then in AS 12 (1977), the war found a permanent home at a resort called Cooper’s Lake which is halfway between Newcastle and Slippery Rock north of Pittsburgh.
I was privileged to attend Pennsic XX in 1991. That year there were just over 8,000 attendees. What started as a weekend event in 1972 has grown to an event taking over two weeks and three weekends to enact. July 27 of this year, over 10,000 people from all over the world will begin gathering at Cooper’s Lake for Pennsic XLI. Motorists southbound on Interstate 79 who are unaware of the SCA will be astonished to see a campground full of everything from one-person, modern pup tents, to huge pavilions that resemble Medieval tents or Viking A-frames. Groups sometimes wall off their campground with walls of cloth or wood. At night, there are no Coleman lanterns, just flickering torches. Banners will fly and you’ll see clothing from the seventh century through the sixteenth.
The war is still fought between the Midrealm and the East. With the kings of the other seventeen kingdoms deciding on which side they want to fight.
As I stated, I attended Pennsic XX. The morning after the opening ceremonies, I was the first one awake in my household. Remembering the pageantry of the previous day, I wrote the following. It is sung to the tune of Blueridge Mountain Girl.

In the foothills of Pennsylvania, by the side of Cooper’s Lake,
Warriors gather for a battle to be fought for honor’s sake.
In the morning mist you’ll see them, like a vision in a dream.
Knight of old with armor shining, in the breeze, their banners stream.

As they meet there, in the meadow, swords will crash and pole arms bend.
When it’s over, they’ll drink together. Annual foes, eternal friends.

Many years, now, they have gathered ‘neath the Pennsylvania skies,
To relive in bonds of friendship, an age old dream that never dies.

And as they meet there, in the meadow, swords will crash and pole arms bend.
When it’s over, they’ll drink together. Annual foes, eternal friends.

In service to my King & Queen (Lucian & Conna), the Kingdom of Calontir, and the SCA. Lady Alisaundre Muir. 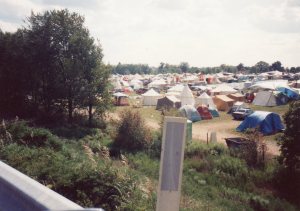 Pennsic XX as seen from I-79

Tents of all sizes and shapes

People of all ages

His Highness, Prince Conn of Calontir

Her Majesty, Queen Brayden of Calontir

His Majesty, King Roderick of Calontir

The Calontir Army mustering for battle

Another shot of the Calontir Army 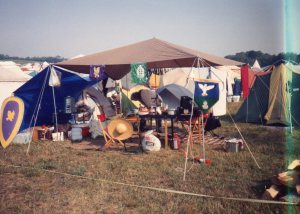 All photographs taken by me at Pennsic XX 1991.