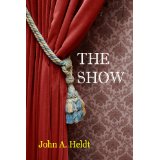 The Show by John A. Heldt

Reviewed by Julia Flowers writing as A. T. Weaver

“Seattle, 1941. Grace Vandenberg, 21, is having a bad day. Minutes after Pearl Harbor is attacked, she learns that her boyfriend is a time traveler from 2000 who has abandoned her for a future he insists they cannot share. Determined to save their love, she follows him into the new century. But just when happiness is within her grasp, she accidentally enters a second time portal and exits in 1918. Distraught and heartbroken, Grace starts a new life in the age of Woodrow Wilson, silent movies, and the Spanish flu. She meets her parents as young, single adults and befriends a handsome, wounded Army captain just back from the war. In THE SHOW, the sequel to THE MINE, Grace finds love and friendship in the ashes of tragedy as she endures the trial of her life.”

This is the third of John Heldt’s Northwest Passage series and the third I’ve read.

I have to say it took me a while to get into this one. The first part of the book is dedicated to Grace and Joel’s life in the 21st century. It isn’t until Grace goes back that the story finally piqued my interest.

When Grace again finds herself in another time, you feel her anguish at the thought of never seeing her husband or twin daughters again.

The author has again broken (or maybe bent) one of the common ‘rules’ of time travel. That of ‘don’t alter history’ when Grace meddles in the lives of her parents. Any other author would see this as a change that could lead to Grace not being born.

However, this tends to fit with Richard Bach’s theory of multiple time lines that run parallel to each other and people who exist on more than one plane.

Mr. Heldt’s research into the time period of which he writes shows in the details of his writing. His descriptions of the clothing, furniture, atmosphere and mannerisms of the time cannot be faulted.

I’m looking forward to the fourth book of the series and any more to come.

This entry was posted in Reviews. Bookmark the permalink.