Hunted by Caitlin Ricci and A. J. Marcus 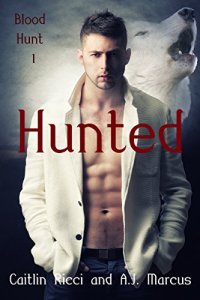 Malik Converse’s life changed dramatically when vampires showed up in pack territory and killed every werewolf they could find. He was out with a hunting party and escaped the worst of the attack, and now he and a packmate are on the run. They’re doing their best to evade the vampires who attacked them while plotting their vengeance.
Aren Ibsen has roamed the vampire courts for centuries, keeping his finger in the pot of vampire politics but never straying too deeply into those tormented waters. When the king of North America is killed by a werewolf, the new king leads the vampires on a crusade to wipe the werewolves off the continent. Aren and some of the other vampires wonder if this brash move is wise.
Aren and Malik cross paths, and they suddenly realize they have similar goals and a mutual attraction. With forces rallying against them, can they survive as fate pushes them to take on roles they never expected? If they do survive this, will the vampire and werewolf communities accept them and the love that blossoms between them?

It was with some trepidation I agreed to read and review this book after receiving it as an ARC. As a general rule, I don’t care for vampire stories because they are usually full of ‘blood and gore’. I’ll have to admit, I was pleasantly surprised. In this day of everyone painting all members of an ethnic group with the same brush, Hunted proves that all groups have both good and bad members.

Aren goes against the conceived stereotype of ‘vampire’. He really doesn’t like killing people in order to drink their blood. When he meets Malik, he finds more in common with the werewolf than with many of his own kind, particularly his new king.

The pace of the book is exciting with not too much blood, and just enough sex without going overboard on either.

I have to say, I look forward to more adventures starring Aren and Malik as they strive to unite the vampires and shifters.

This entry was posted in Reviews. Bookmark the permalink.