The Adventures of Damien and Drew – Chapter two 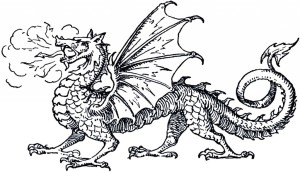 Damien woke about 4:30 and decided he should find somewhere to get food. After a shower, he dressed in black leather pants and a black t-shirt. He sat on the bed and opened the local phone book he found in a drawer. Looking through the restaurant listings in the yellow pages, he saw there was steak house close by. Maybe some good red meat would help him think.

As he stepped in the door of the restaurant, the feeling hit him. Wolf. Was his quarry here? He looked around the dimly lit room. Nothing stood out.

A young man approached. “One for dinner, sir?”

“Yeah. Can I have a booth facing the door?”

“I’ll see what I have.” He looked at his chart. “Follow me.” He led the way to a booth toward the back of the room.

A feeling of evil followed Damien, and his back shivered with the chill.

“Perfect.” Damien slid into the booth where he could see the front door.

The boy handed him a menu. “Your waiter will be right with you.”

Damien looked over the menu, and flexed his shoulders. The chill wouldn’t go away.

A good-looking, dark-haired man approached the table. “Good evening. My name is Drew, and I’ll be taking care of you this evening. Can I start you with a glass of wine or a cocktail?” His jeans fit like a second skin, and the vee opening of his shirt revealed a patch of dark hair that matched the shoulder-length hair on his head.

“I’ll just have a cola to drink.” Damien looked at the menu. “And bring me one of your fried onions.” He looked at Drew and smiled. He wouldn’t mind tasting the attractive young man.

Drew blinked a couple of times before smiling back. “I’ll be right back with your drink.”

Damien noted the sparkle of interest in Drew’s eyes as he turned and walked away. Maybe he could have some fun while he was here. He’d never considered taking a human as a partner, but there was something about Drew that pulled at him, and it wasn’t just sex. His father told him that when he met his intended partner, he’d know deep inside. He’d had that feeling with James. Could that be what he was feeling? Was it possible to find a second love? Somehow he’d never considered his fated mate could be human. He knew he was destined to be with another male, maybe not another dragon, but at least he figured it would be another shifter of some kind.

Drew brought the drink. “Have you decided on dinner?”

Damien smiled. “I want your largest sirloin. Cooked rare. I know you can’t serve it raw, but make it very rare, just as rare as they can make it. Add a baked potato with butter and sour cream.”

Damien frowned. Was something wrong with the young man’s eyes that caused him to blink so much? “What dressing options do you have?’

Damien studied the choices. “I guess I’ll have the tossed salad with ranch dressing, please.” Ranch wasn’t his favorite, but few places served French dressing anymore. He handed the menu to Drew.

“Very good. I’ll be right back with your onion.” Drew turned and left.

Damien again followed his retreat. He took a sip of his soda and looked around still trying to find the source of the evil. The man must not be visible. Maybe he was in the kitchen.

Drew brought the fried onion. “The white sauce is ranch, and the yellow is spicier. Has some horseradish in it. Another cola?”

Damien picked off a piece of the onion and dipped it in the spicier sauce. He didn’t find it too spicy. After all, his dragon was used to the feel of fire.

Drew placed the plate with the steak in front of Damien. “Hope it’s the way you like it, sir.”

“Looks perfect.” Damien cut into the steak and blood ran out of it.

Drew wrinkled his nose in distaste. “Is that even warm?”

“Not really, but any warmer would be too cooked.” He looked at Drew with a slow sexy smile. “Haven’t they told you to not question a customer’s taste?”

Drew’s face registered confusion. “Yeah. But sometimes I forget. Let me know if you need anything else.”

“Your phone number?” He didn’t usually pick men up like this, but there was that feeling inside again that this man was special.

Drew shook his head. “I’m sorry, but that isn’t on the menu.” His blue eyes with a dark rim around the iris reflected his smile.

Damien read the interest in the smile. Something about Drew reminded Damien of James. Maybe it was the hidden laughter in his eyes. He shrugged. “Can’t say I didn’t try.”

Drew left and Damien bit into his steak. It was a little on the done side for him, but not bad.

When his plate was empty, Drew came back to the table. “Dessert?”

“Not tonight. Just bring the check.”

Drew brought his bill and Damien handed him a credit card.

Drew looked at the name on the card. “Damien? Wasn’t that the name of the demon in The Omen?”

Damien smiled and winked. “I can assure you I’m no demon even though I’ve been called a devil once in a while.”

When Drew brought the receipt back, Damien noticed a note on the back of his copy. I get off at 10:30. He looked at Drew, winked, and nodded.

This entry was posted in Damien. Bookmark the permalink.