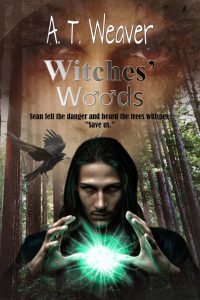 Andy got out of his car at the lakefront a few minutes before eight.

A bulldozer, three logging trucks, a crane, and a truck equipped with a giant saw on the back stood between the lake and the woods.

The sky was cloudless, there was not even a hint of a breeze, and the temperature was unseasonably warm, especially for so early in the morning.

James Buckler stood beside the bulldozer. He wiped his face with a handkerchief as a news truck pulled into the clearing next to the logging trucks, and a reporter and photographer got out.

Andy smiled inwardly. Buckner was acting nervous. Maybe the talk of witches was getting to him. Or it could be the mind-talking. Hearing voices and not knowing what it was about would be unnerving. He was glad Sean had explained it to him.

The photographer turned a video camera on the assembled group.

“You people have no business here,” James Buckler said to the gathered crowd. “Go on home and stay home.”

“We’re just watching to see what happens when you try to clear the woods,” Bill Davis said. “We’ll see how the witches handle things.”

James’ face turned red in anger. “I told you there’s no such thing as a witch!”

The reporter approached James. “Mr. Buckler, how do you propose to clear that hedge? The townspeople seem to believe the woods are protected by witches.”

“Really? In this day and age, you believe in witches?”

“Didn’t say I believe, but the townspeople seem to. What’s going to happen to the trees?” He held the microphone toward James.

A fake smile covered James’ face as he handed him a folder. “Here’s the official statement regarding these proceedings from Aronson Resorts. You’ll find architects’ drawings of the planned facility. The wood from the trees has already been negotiated for with a fencing company. The proceeds will be used to offset the cost of construction.”

A black limo pulled up, and the mayor and governor emerged.

Are you ready Andy? Sean’s calm voice sounded in his head. Look to the top of the hill.

He turned his head. Ready as I’ll ever be. “Look!” He pointed to the top of the hill as three hooded figures appeared out of nowhere. Two tall figures flanked a third about a foot shorter. All three held tall staffs. A huge black bird perched on the shoulder of one of the taller figures, and an enormous black dog stood beside the other. “There. See. The witches.”

The photographer turned his video camera toward the three.

The figure with the raven raised his hand and pointed a finger toward the photographer. A red stream, almost like a laser beam, followed the trajectory of the finger.

The camera fell from his hands.

The reporter glared at him. “What happened? Why did you drop the camera? That thing is delicate and expensive. You break it, it’ll come out of your pay.”

“It felt like it’s on fire.” The photographer shook his hands and blew on them.

The reporter turned to James. “Do you foresee trouble?”

James shook his head. “If they think they can scare us into stopping this, they’re very much mistaken. It’s just three people dressed in robes. That one must have a laser gun.”

The governor looked around at the assembled equipment. “Are we ready to break ground?” He was sweating, and his eyes darted around the area nervously.

“Ready when you are.” James handed the governor an axe and pointed toward a small tree. “If you’ll chop that sapling, the photographer will take a picture, and we can get started. The ‘dozer will make quick work of the hedge around the trees, and then we can cut the taller trees down.”

The governor looked at the photographer. “Be sure and film me from the front and from the waist up. I don’t want my paunch to show.”

The photographer nodded, gingerly picked the camera up from the ground, and moved to get a better shot.

The governor took the axe from James and moved toward the sapling.

On the hill, Sean, Kyra, and Kieran raised their joined hands. Their voices carried to the assembled group as if they were speaking through amplifiers. As one, they said:

“We call upon the power of three.

Then the figure with the bird raised his arms, pointed the top of his staff toward the woods, and chanted:

“Let the trees their voices scream,

I call on Flidais, ‘Hear my plea.’

He turned his other hand over, and something fluttered to the ground.

The governor raised the axe and struck the sapling, felling it with one blow. An earsplitting scream echoed through the air. It sounded as if it came from the sapling as it fell.

A loud wailing, like the sound of a thousand voices, arose from the woods. Although the people felt not even a small breeze, it looked like a hurricane had hit the woods. Branches waved in the air as if the trees were waving their arms.

A red substance oozed from the stump of the sapling.

Bill Davis pointed at the stump. “Look! The tree’s bleeding!”

A waving branch from one of the younger trees caught James on the shoulder and nearly knocked him down.

“It’s the witches!” a woman called. “The trees are protecting their own.”

The governor cowered behind the mayor and grabbed her arm, his eyes wild with fear.

“You pantywaist, get away from me!” She pulled her arm away.

The shortest figure pointed its staff at the lake and a female voice intoned:

“Mighty Morgan, I call on thee.

Let the winds stir up the sea.

The woman made a motion of waves with her hand.

James hurriedly stepped away from the lake as waves whipped up by strong, gale-force winds rose to a height tall enough to please the most avid surfer and crashed against the shore of the usually calm water. Each wave brought the waters of the lake closer to the group, the equipment, and the trucks.

The governor ran and stood beside the limo.

Larry Stewart spoke, “It’s just like the story my dad told last night about my grandfather trying to put a boat in the water. The lake wouldn’t allow it.”

The third figure raised its staff:

“Taranis, we call upon your lightning.

Let it strike an it harm none,

Just kill the beast that eats our trees.

He struck the ground with his staff.

Visible rays of light rose from the head of the staff.

Lightning flickered across the clear sky, and thunder immediately exploded in a deafening roar that shook the ground. A bolt of lightning struck the bulldozer. Smoke rose from the engine, and the smell of burning oil filled the air. Rain poured in buckets from the cloudless sky. The tracks of the ‘dozer sank into the fast-developing mud. Most of the crowd raced for the shelter of their cars leaving only a handful of people standing in the rain.

As the crowd stared at the trio on the hill, their bodies shimmered with light, and they disappeared leaving three clouds of energy.

Andy ducked his head to hide his grin.

“Who were those people?” the governor asked. “Where did they go?” He looked around wildly and grabbed James’ arm.

“We warned you,” Andy answered. “The witches of Witches’ Woods don’t want you here.”

James pulled away from the governor. “I told you people, there is no such thing as a witch.” He stomped his foot like a petulant child.

This entry was posted in Witches Woods. Bookmark the permalink.