I’m signed up again this year. Don’t have a title for what I’m going to work on. Trying something new – a time-travel. It will have two romantic threads – one m/m and one f/m.

Great review from Smoocher’s Voice. Thanks. 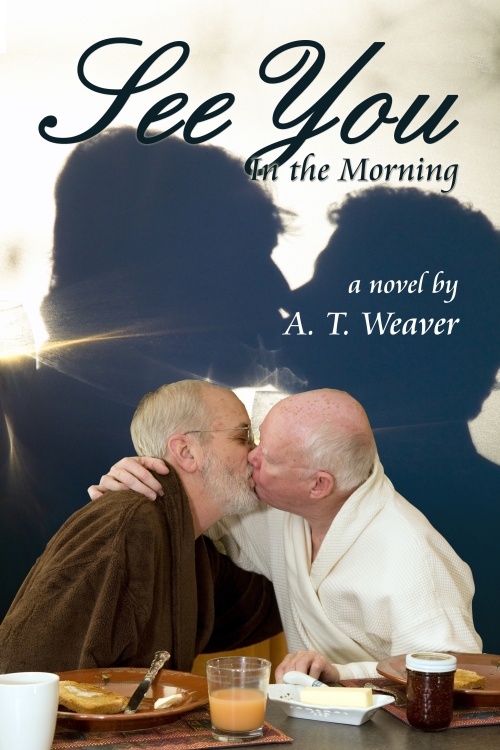 Jake and Dave lived and loved for over fifty years. During that time, they campaigned for gay rights. They married each other three times until, finally, in 2013, the United States Supreme Court declared DOMA to be unconstitutional and thus legalized their union.

They made a family and raised four beautiful children together.

When he loses Dave to a massive stroke, Jake feels his world has ended. Join him as he relives a life well-lived through memories triggered by photos of his and Dave’s years together.

There was one point when writing Acceptance that I was crying so hard I could hardly see to type. It happened again this morning while working on See You In The Morning:

Dave stood at the head of the table. “There’s something Dad and I want to discuss with all of you, especially you four kids. We’ve been talking since the celebration in June. We aren’t getting any younger. We’re both in our seventies now. Soon one of us is going to die…”

“Baby, remember when Grandpa Jerry died? I told you then ‘death is a part of life.’ We all come to that time, some of us sooner than others.”

“Are you and Dad okay?” Ben asked.

“There’s nothing wrong with either of us except that our bones creak a bit and we move a little slower. We both had physicals last month and everything’s fine,” Jake answered.

“So why bring it up now?” Mary asked.

“Because Dad and I want you to know our wishes. What we want to happen to us,” Dave said. “We’ve been talking and we want to be together. We’ve been together for over fifty years and don’t think it should end with our deaths,” Dave explained.

Dave handed each of them an envelope. “Inside these envelopes are notarized statements. It isn’t our wills. Those are in the safe deposit box at the bank. Ben, you and Mary are authorized to get into that box since you are the two oldest.

“This envelope contains what we would like to have done with our bodies.”

Jake took over. “We want to be cremated. I know there was a time cremation was not as common as it is now. We have pre-paid plans that are also in the safe deposit box. Whichever one of us dies first, the other is to keep his ashes. When we’re both gone, one of you kids, or all four of you, is to take both of us to Point Bonita. There where we had our first kiss, where we got married, is where we want to be together.”

Tears cascaded down Mary and Chrissy’s cheeks and sobs wracked their bodies.

“Of course, you kids may not be able to get all the way down and back up. You may have to send one of the grandkids or great-grandkids,” Dave said with a smile. “Mary, Chrissy, save your tears for when we’re gone. Celebrate while we’re still here.”

Ben stood up and raised his glass. “A toast to our fathers. Two of the greatest men I know. They may not be famous, but they made a big difference in our lives.”

Excerpt from See You In The Morning

This morning, I posted an excerpt on the NaNoWriMo site from my WIP so decided to also post it here:

Jake sat by the hospital bed and clasped the hand of the man he’d loved for over fifty years. The only sound in the room was the rhythmic pump of the ventilator as it forced air in and out of Dave’s lungs.

The nurse laid a hand on Jake’s shoulder. “Mr. Williams?”

Jake turned. “Just a few more minutes. Our kids are on their way.”

The door opened and Chrissy entered the room. Streaks formed by mascara-blackened tears ran down her cheeks. Her voice quivered. “Daddy?”

“Come on in, Baby.” Jake reached his empty arm out to her.

“What happened, Daddy? Will Papa be okay?”

Jake shook his head. “No, Baby. He had a bad stroke.” He paused. “His brain wouldn’t stop swelling. The doctor said a few minutes ago there is no brain activity. The ventilator is breathing for him and that’s all that’s keeping his heart beating. I wanted to wait for you to say goodbye before they shut it off.”

Isaac and Mary walked into the room in time to hear what Jake said. Isaac placed his hand on Jake’s shoulder. “Are you okay, Dad?”

“Do you think he knows we’re here?” Chrissy asked as fresh tears followed the black streaks down her cheeks. She wiped them with the back of her hand.

The nurse handed her a tissue.

“I’m sure he does,” Jake answered. “He may not know it in his body, but his spirit knows. That’s still alive and watching us.”

Chrissy leaned over and kissed the forehead of the man in the bed. “Goodbye, Papa.” She straightened up and leaned into Jake’s embrace. “Daddy, Brad and the kids are outside. Should they come in?”

“I don’t think Papa would want the kids to see him like this. Let them remember him the way he was at Tony’s birthday party last Saturday when Papa teased him about his girlfriend. You go on and wait outside with Brad and the kids. I’ll be out in a few minutes.”

Chrissy kissed Jake’s cheek and walked to the door.

Jake watched as she stepped into the arms of her husband.

Isaac patted Dave’s shoulder. “I love you, Papa. I say a prayer of thanks everyday for you and Dad. Who knows what would have happened to me if you hadn’t found me.” He, too, left the room. “I’ll be outside, Dad.”

Mary laid her head beside Dave’s. “I love you, Papa. Thank you for being who you are. Thank you for helping three kids stay together and making us a family.”

After the kids left, Jake spoke to the man in the bed. “I’m just sorry Ben couldn’t get here. He and Miguel are in London for a concert. We did a good job, Babe. We raised four wonderful kids. Who would have thought all those years ago where pizza would lead?”

He turned to the nurse and nodded. The ventilator stilled. The peaks of the line the line on the heart monitor became more irregular until it finally turned into a straight line. Jake stood up and brushed a stray hair from Dave’s forehead. Hair that once was so luxurious and black was now snow-white and thin. He leaned over and kissed him. “Goodnight, my love. I’ll see you in the morning.” His shoulders drooped as he walked out of the room.

So far in Nano, I’ve written 8,512 words. I had about 4,000 and suddenly my characters decided they wanted to do something that wasn’t in the original outline. So here I am 4,600 words later and still not finished with what they told me they wanted.

Attended kickoff for NaNoWriMo. Looking forward to starting See You In The Morning on Friday.